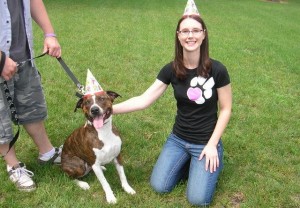 I am a newlywed, which means everybody is asking when my husband and I are going to have kids. It’s a tough question to answer. Am I ready for children? Do I even want to have kids? Can’t our two cats and Boxer-mix dog be enough? They sure feel like kids to me, and truth be told, I usually prefer spending time with animals anyway. Not to mention the fact that we are still paying off debt, saving up to buy our first house and barely feel like we can keep our own lives on track, let alone be responsible for another human being!

That isn’t to say I don’t treat my pets like kids now. Put a hidden camera in my home and my crazy cat and dog lady tendencies tend to come out. I put my female cat in cute little dresses and my dog in a Snuggie. I talk to them. I ask them questions. I sing songs about them. We snuggle on the couch and watch TV as a family (yes, two humans, two cats and a 50-pound dog all on one couch). I’ve arranged play dates. I took the dog to obedience school. I even planned a birthday party for him in the park with some human and canine friends, a personalized doggie cake and party hats. And I refer to my husband as “dad” when talking to them (“Go to Dad because Mommy needs to get up and make dinner now.”).

While admitting that is somewhat embarrassing, I am comforted by the fact that I am not alone. There has been a rise in doggie daycares, pet sitting businesses, specialty pet shops and the like across the country, and there are plenty of people guilty of pampering their pets. It certainly has become more socially acceptable to spend more money and time on your four-legged friends.

Science Behind the Fur Baby Phenomena

It Turns out, this “fur baby” phenomena is something that experts such as doctors, researchers and behaviorists are actually studying. “Biologically speaking, young adults are wired to find a mate, love and reproduce,” Dr. Rita Eichenstein, a pediatric neuropsychologist at Cedars-Sinai Medical Towers in Los Angeles, explains in her upcoming book, “Fire Your Therapist, Hire Your Dog; 10 Secrets From The Animal World That Therapists Can’t Teach You.”

Eichenstein discusses how in today’s digital age, humans are living in a socially isolating environment, where Facebook and Twitter substitute for real relationships. This then introduces a loneliness factor for some, especially among young adults. “It is this group that has enthusiastically embraced dog ownership,” she writes. “Dogs are the antidote to loneliness, missing loving relationships and provide both social comfort and nurturing that we are wired for. Other reasons include unconditional acceptance, socialization with other people through walking your dog and helping you stick with a routine.”

Dr. Amy Blackstone, an associate professor and chairwoman of sociology at the University of Maine, studies childfree adults and has personally chosen to remain childfree in her marriage. She has another perspective on this topic, and blogs about her own experience at werenothavingababy.com. A recent post discusses how dogs bond like babies. “Dogs bond with their owners in ways similar to children with parents, according to findings from a new study published in the journal PLOS ONE,” she says. But while dog and baby comparisons make sense, “what makes less sense to me is when people ask or assume that dog-is-to-childfree-person as baby-is-to-parent. That’s sorta like comparing apples to oranges.”

“To me, there are just far too many differences to think that the comparison is a reasonable one,” she elaborates. “Dogs may go to puppy preschool, but one never has to worry about scrounging up tuition for a costly college education, and while 5-year-old Rover can chillax at the house alone while his owners go out on the town, I’ve heard Child Protective Services frowns upon parents who leave their 5-year-old humans home alone while they head out boozing, and, finally, dogs generally don’t expect their bums to be wiped after taking a No. 2 (to name but a few important differences).”

And for many, those are some of the exact reasons they choose “fur babies” instead.

Meet Linda McGrath-Cruz, a 36-year-old married woman in Miami who is childless by choice, and the “mom” of three Chinese Crested dogs. Linda considers and takes care of her dogs as children, but maintains that she knows they’re not real children. “I know they are dogs, but they have enriched my life and definitely made it more enjoyable, and I do the same for them. They even have health insurance!” she laughs.

Linda made the choice long ago not to have her own children, in part to pursue career goals and travel more. That’s not to say her dogs aren’t an integral part of her travel though! “Our vacation plans always revolve around them,” she explains, “but when they can't go with us, we take their care very seriously, and only the best boarder will do. Don’t all parents need a kid-free weekend once in a while?”

Linda has taken the dogs along on plenty of vacations though, including a weekend beach vacation in St. Pete Beach in Florida, with a dog-friendly hotel and beach, and her three boys got to take part in a fun weekend in the sun.

While, as mentioned earlier, it is becoming more socially acceptable to have “fur babies” or just to pamper your pets, it doesn’t mean those who do don’t encounter criticism. Linda shares that her friends and family have never made an issue of the fact that she doesn't have children, but others have called her selfish for her decision to not have children. “I have been confronted by women with multiple children who insist that it is quite literally impossible to lead a fulfilled life without the experience of having and raising a child. I think the decision to have children when you don't want them, or when you aren’t prepared to change your life for them, is more selfish.”

Whether you have pets in place of children, in addition to children, as practice for children or maybe even after children, benefits of pet ownership in itself are increasingly touted for stress levels, companionship, health reasons and more (but that’s a whole separate blog post!). Plus, you can choose your fur baby and adopt based upon size, temperament or appearance, unlike a real baby.

For me, I’m still not entirely certain if I should have my own children or if I just want a life with my fur babies. I strongly believe in adopting (rather than buying from a pet shop) pets, and I suppose the same could be said for children, that there are plenty of kids in the world without parents who need a loving home. My future might have several more adoptions in it … of the feline, canine and possibly even human variety. In the meantime, I am living life very happily with my three fur babies. Which reminds me … it’s time to give the dog a bath and start planning his next birthday party. Just like kids, right?