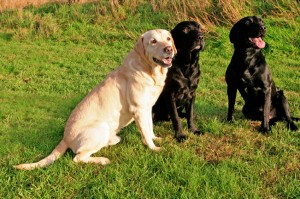 While we're all aware our dogs should know basic commands, sometimes we need a reminder on why certain commands are so important and how they can even save a dog's life.

This is my list of the top 5 commands I believe all dogs should know and respond to. If you have additional commands to add to the list, please mention them in the comments.


5 Commands Every Dog Should Know

This is obvious, right? But how many dogs will actually sit on command the first time? And even during "exciting" scenarios such as while meeting other dogs?

Working on a solid sit command is so important because it helps keep a dog under control, which means the dog gets to do more things. It's also helpful for when you're waiting with your dog at the vet's office or when you're trying to pay afterwards. Much easier if your dog will sit and remain still!

Teach your dog that "sit" means "sit and keep sitting until I release you."

Another good one, which is really an expansion of "sit" or "down." There are times when we need to keep our dogs in one place, often while we take several steps away.

"Stay" is useful in all sorts of situations such as when you want to get a photo of your dog. I also use this command every day when I want my dog to remain on his dog bed and not bother me, such as when we're eating dinner.

3. Free! (or something similar)

Our dogs need some sort of cue to understand when they are "free" to move around again after we've told them to sit or stay.

If we don't have a release word for our dogs, it stresses them out because they have to guess when to get up, and they usually attempt this much sooner than we'd like.

By using a release word such as "free!" or "OK!" we take the guesswork away. This also eliminates the need to keep repeating ourselves every couple of seconds. You know what I'm talking about. "Stay ... stay ... stay."

Having a release word allows the owner to use a single command and the dog will learn to remain sitting until given the cue to move around again.

Important, again, for obvious reasons. Dogs that don't come when called can get into all sorts of trouble. They are more likely to run off and get lost or hit by a car, so they don't get to experience off-leash freedom like other dogs.

They are also more likely to chase things or get into confrontations with other dogs.

See our post on how to get a dog to come when called every time.

Dogs pick up gross and sometimes dangerous objects in their mouths. Need I say more?

Teaching a solid "drop" command is important so the dog learns to give up anything (dead squirrels, bones, chocolate cake) on command.

Use a highly valued reward when teaching this command. The reward should be better than whatever the dog has. Another related command that's also good to teach is "leave it" which means not to touch the item in the first place.

There are many other important commands for dogs to know (heel, watch me, down, etc.), but these five are the most important in my opinion.

What are some other helpful commands you think all dogs should know?