Ever wonder how dogs show love?

People typically show affection to their dogs by talking with them, hanging out together, petting them, giving hugs, and so on. But do you know how dogs show love back?

Sometimes dogs appreciate our cuddles and kisses, and sometimes they just tolerate it!

But how do dogs show love back?

Since Valentine's Day is coming up, I thought it would be fun to ask professional dog trainers how dogs typically show affection towards their owners. Here's what they had to say.

How do dogs show love?

She said the dog will poke his or her nose into your elbow and burrow it a little.

“Just a simple sigh shows affection, too, with the dog expressing his contentment in the owner's presence,” she said.

According to her, dogs will even “smile” at us, usually during a “robust greeting” to “reflect our happy faces in theirs.”

2. Resting next to you

Not all dogs express their affection towards people in typical ways, said Patricia Bentz. She is a trainer with K-9 Training & Behavioral Therapy in the greater Philadelphia area.

She said some signs are obvious while others are more subtle.

For example, she said very independent dogs typically show their affection by quietly resting right next to the people they care about.

Since dogs bond with humans through play, Bentz said it makes sense that when a dog wants to show affection to a specific human, he or she will initiate play like tug of war or fetch.

For example, if a dog is normally very shy around strangers but wants to show affection to an individual, he or she might bring that person Ever wonder how dogs show love? We have identified 6 tried and true ways you can tell if your dog loves you.

She also added that it’s important to differentiate between “affection” and “attention-seeking.”

“Some dogs will exhibit attention-seeking behaviors which do not necessarily mean that these dogs are being affectionate,” she said. “They just want attention.”

A good example of this might be when your dog is sitting next to you and whining or barking! 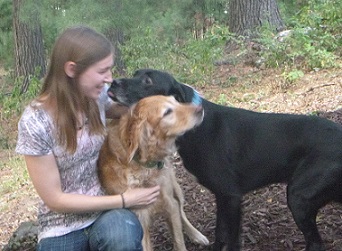 Tail wagging can show a number of emotions ranging from happiness to fear, but Cherie Mascis, the lead dog trainer for Best Friends Animal Society, said a tail wagging with a loose, wiggly body usually means a happy dog.

According to her, another way dogs show affection to us is when they show they trust us by being vulnerable. For example, dogs sleep with us or they roll over to let us rub their bellies.

She said to also watch for things like play bowing which shows “the dog considers you fun!”

Michael Schaier, owner of Michael's Pack, said certain dogs will show affection by licking us. Sometimes this is a learned behavior the dog does once he or she has figured out how much the person enjoys the licking.

“They act accordingly,” he said.

Another sign of affection is when a dog jumps on you, even though it’s not something most of us appreciate!

Schaier said this is how dogs typically greet one another.

“However, as a trainer, this is one method of showing affection that I spend a lot of time trying to change.”

What are some other ways you’ve noticed how dogs show love?