We've all seen it, and maybe are even guilty of it ourselves: Driving down the road with a dog loose in the car, windows down, head out the window ... or worse yet, sitting in the back cab of a pickup truck. It may seem harmless, especially when your dog loves to feel the breeze on his face, but the cost could be more than you’re willing to risk.

There are many dangers to this activity. Debris can strike a pup’s face outside, which can cause serious injury and costly medical bills. Ever been driving down the highway when a truck kicks up a rock on your windshield? Imagine that same rock hitting your dog. Not pretty.

What’s even scarier to me is that when a dog’s head is out the window, his front legs are often propped up on the armrest on that door. Some cars have those automatic window buttons right by his foot, and if he takes the wrong step, he may actually close the window on his neck.


Even worse still, if he tries jump out of the window, he could get stuck, or his leash or collar could get caught on something inside, leaving his body hanging or dragging outside, and at risk of chocking himself and great bodily injury if not death. Or if he makes it out, he is at great risk of getting struck by another car.

For me, that risk will never be worth it. Instead, so Brick can get his fresh breeze fix safely in the summer, I crack the window open only about half an inch so that when he puts his face up to it, he can sniff the air without worrying about any of the dangers of it being open any further.

OK, so hopefully by now you’ve realized it’s safer for your pup to keep the windows closed while he’s inside. But even then, there’s danger of having him loose inside the car.

Amy Robinson, a professional dog trainer, shared the statistic with us that 31% of drivers surveyed by AAA admitted to being distracted by dogs riding in their laps. Hawaii has even outlawed it, and other states have fines for drivers caught with dogs peering out the driver's window. Plus, in a head-on crash at just 35 mph, a 50-pound dog can fly forward at 1,500 lbs of force, according to the ASPCA.

Further, the American Pet Product Association conducted a survey and found that in 2012, only 28 percent of dog owners used a safety restraint in their vehicles.

“As a medical insurance provider for cats and dogs, Trupanion has received many claims from dogs who have jumped out of moving vehicles or been in accidents on the road,” Kerri Marshall, DVM, and chief veterinary officer at Trupanion, shared.

Marshall offers the following tips to keep your dog safe while traveling on the open road: 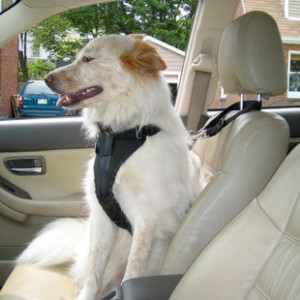 OK, enough about the scary dangers! As Marshall mentioned, small and large dogs alike can travel in carriers or crates in the back of your SUV, or on the back seat if it’s small enough. Small dogs also can fit into car seats with a harness, or use a booster seat.

Robinson tells us that she likes to use a dog seat belt for her big guy. “He is in the back seat in the middle, and his belt is a strong harness which I then attach to the locked seat belt. He leans against the back seat and enjoys the view.”

Didn't know these kind of products existed? No problem! dogIDs understands how important it is to safely secure your dog in the car and carries a wide selection of dog travel products like crates, harnesses and bucket carriers.

Secure Your Dog With Just a Leash

As much as you hope to always be prepared, sometimes you simply aren’t. Maybe you haven’t had a chance to pick up your restraints yet, or they broke, got lost, are sitting inside waiting to get washed, or you unexpectedly have to use another car without proper restraints on hand. Whatever the reason, Jme Thomas, executive director at the Motley Zoo Animal Rescue out of Washington state, offers these tips for keeping dogs secure when you have nothing but the leash.

However, she says “In an accident, this would not be ideal. With enough slack for the dog to stand up and lay down, it's hardly different than a loose dog flailing around the car either... but is much safer than the dog distracting and endangering the driver and other traffic.”

And if you need even further reason to use a crate, Thomas says that emergency responders are not allowed to get dogs to the vet in an accident if they’re not in crates. However, if they are, and if the crate survives the crash, they can shuttle them to the vet.

It’s also important to note that car safety tips apply to cats as well. Your feline friends should also never be loose inside the car, especially since their often smaller bodies can wiggle down into dangerous places like behind your pedals. Keep cats in their carriers at all times, and strap them in as well. I pull the seat belt through the handle on top and buckle it in like a child’s car seat.

Because our pets are our fur babies, any small step to keep them safer is always worth it. Happy travels!