Depending on where you live, you may need to consider extra care for your dog’s paws in winter months. For example, winter weather can cause cracked or dry paws. Plus, some dogs are sensitive to the cold, snow and ice on their feet.

For these reasons, I reached out to two veterinarians to get their advice on winter paw care.

Should your pup wear dog boots?

I wrote a whole post on dog boots last winter, and my opinion is that some dogs need boots and some don’t. It just depends on where you live, your dog’s tolerance to the cold and what activities you’ll be doing.

While dog boots may not be necessary, Dr. Mark Dilworth, a veterinarian and owner of Beaches Animal Hospital in Toronto, recommends boots for some dogs.

For example, if the dog has brittle nails, he said sharp ice or salt may be irritating or harmful. Also, dogs with osteoarthritis could benefit from a good pair of boots to prevent slipping.

Dog boots may be a good idea in the city if your neighbors use a lot of salt on the sidewalks, Dilworth said.

“Salt is an irritant to a dog’s paws, especially if they already have any type of inflammatory disease.”

He also said active dogs can experience inflammation when running on icy surfaces, which will make them susceptible to the pain caused by salt.

“These active dogs may also experience cracked nails or pad lacerations from running on hard, jagged ice,” he said. 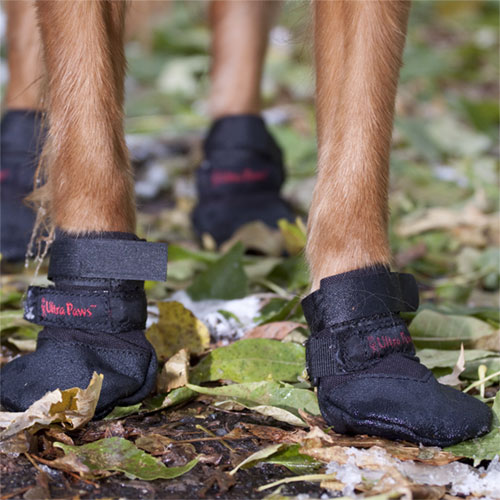 What to do about cracked paws

Dry or cracked paws are best treated through rest, according to Dilworth. He said there are also some moisturizers that can provide comfort.

Dog owners can even apply petroleum jelly to the paws, according to Dr. Erin Shults, a veterinarian and CEO of Mazie’s Mission, a nonprofit veterinary hospital that serves animal rescue groups and shelters.

She also recommends a product called paw wax that can be applied before venturing outside as protection to the paws or afterwards for soothing dry paws.

Dilworth mentioned a concern about fluffy dogs with tufts of hair between their toes.

“Ice balls can accumulate and cause discomfort to their skin because the interdigital skin is not as protected as the pads of their paws,” he said.

Shults also brought up this issue and said owners can trim fluffy feet to help prevent the ice-ball accumulation.

If your dog tends to get clumps of ice stuck to her paws, she recommends keeping a bowl of warm water by the door and dipping your pup’s feet in after being outside. This will slowly melt the snow and ice, and then the paws can be wiped with a cloth.

As for a dog’s nails, those should also be well trimmed, Dilworth said. Longer nails are more likely to break if the dog runs on a hard surface like ice.

The risk of frostbite

Perhaps one of the most serious safety concerns in the winter is frostbite.

Frostbite is more common on the tips of a dog’s ears or nose if the dog is left outside without protection, Dilworth said.

While frostbite can occur on any extremities, he said “the vasculature and pads of the foot help prevent frost bite, even with little fur coverage.”

With paw care in general, he said it’s always smart to take a look at your dog’s paws every day.

“If you do see irritation, consider using boots to protect against salt, ice and snow,” he said.

Does your dog wear boots in the cold?