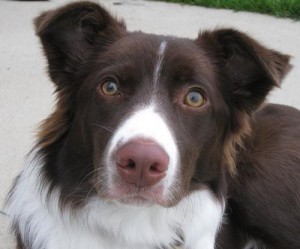 If you're adopting a new dog, it's so important to set the dog up for good behavior in your home. This post will help you learn how to prevent unwanted behavior like accidents and fights by controlling the dog's options. These tips can also be applied if you plan to foster or pet sit a dog in your home. Prevention goes such a long way!

1. Keep the dog on a leash for the first few hours.

A leash allows you to directly supervise the dog at all times. I prefer to use a 6-foot leash. If the new dog is on a leash, he's not going to be running all over the house, scratching up the carpet, chewing on things and knocking over shelves. He'll be less likely to lift his leg and mark and he'll be less likely to have an accident because he won't be able to sneak off and pee on the scratching post in the other room! After a few hours, you might decide you trust the dog, and at that point you could give him a little more freedom.

2. Take the dog outside often.

I've found that even if a dog is supposedly "housebroken" in one environment, she won't necessarily know what to do at my house. To prevent accidents, I simply take the dog outside every 20 minutes until she goes to the bathroom. After that, I take her out every two hours or so. If she goes a full day without any accidents, then I usually allow the dog more freedom at that point.

3. Use a kennel when you can't supervise.

It's not possible to supervise a new dog every second. When you can't supervise, a kennel can be a helpful tool because it prevents the dog from making mistakes and forming bad habits like chewing, barking or having accidents. I like to look at the kennel as a tool to allow the dog full freedom in the future. My Lab mix Ace stayed in his kennel when home alone for about a year. Since this helped him form good habits - curl up for a nap when home alone - he has had full freedom of the house ever since.

Every dog is different, though, and some dogs will not respond well to a kennel. If that is the case, I recommend you at least block off certain areas of the house by closing bedroom doors or using baby gates.

People tend to rush dog introductions because we want the dogs to play and have a good time. However, it's much wiser to take things slowly at first and allow the dogs to interact more and more as they show good behavior. For example, instead of allowing the new dog to barge up to your existing dog's face in the doorway, take the two dogs on a long walk together side by side. If all goes well, perhaps you could let the dogs sniff and interact a bit during this walk. While indoors, baby gates can be a helpful tool to allow the dogs to see and smell one another without getting too close at first.

Until you get to know the new dog a little better, keep all the dog toys, balls, bones and even food bowls put away when not in use. Even dogs that are normally friendly could act quite differently if they're trying to guard a bone or a toy. To be on the safe side, feed the dogs in separate rooms at first, and begin giving them toys when you are able to supervise. When play sessions are over, put the toys away again. It's also a good idea to give the dogs rawhides and bones when they are in separate rooms.

What are some other ways to set your new dog up for good behavior?