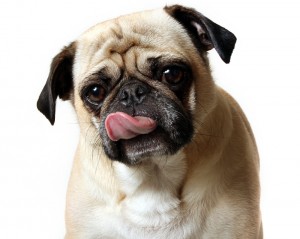 My dog typically stares at me and drools while I’m eating until I eventually smile or give him some of my food. My behavior of course encourages Ace to beg, even if I only acknowledge him 50 percent of the time.

Since so many other dogs beg while their humans are eating, I asked a professional dog trainer for some tips on how to manage this behavior. Please leave your own suggestions or questions in the comments.

How to stop a dog from begging

“Dogs are constantly trying to figure out what works for them,” said professional dog trainer Liz Maslow, who specializes in training and socializing puppies.

According to her, dogs will eventually stop begging if the behavior is not reinforced. However, giving a dog any attention at all will increase the likelihood of the behavior. This attention could include food, eye contact, touch, talking to the dog or even reprimands.

“The biggest mistake is giving in to those pleading eyes,” she said.

To stop your dog from begging, you should teach him to do something else instead, according to Maslow. For example, she rewards her dogs for lying on a mat while she eats.
“It is really easy to teach them that food mysteriously falls onto their mats when they are lying on them while we eat,” she said.

While your dog is just learning, she suggested teaching the dog to lie on a mat or dog bed when you’re not eating because this is too much of a distraction for some dogs at first.

Set the dog up for success.

“Do not wait for your dog to make a mistake,” Maslow said. “Instead, prevent bad habits from forming by using a crate or baby gates to separate the dog from the food.”

This will help your young or untrained dog from making mistakes until they have learned the appropriate way to act during mealtimes, she said. For example, puppies can’t be expected to have the willpower to leave food alone that’s been set out on a table or counter top.

“Always try to make it easy for your dog to be successful,” she said.

Another way to help your dog is to give her something to keep her busy such as dog chews, a bone or stuffed puzzle toy, Maslow said. She also feeds young dogs before she eats so they are not hungry, but she said it doesn’t seem to matter as much as the dogs get older.

If something is sporadically reinforced, the behavior will still increase, Maslow said. This is why so many dogs learn to beg at the table, and it’s also why it’s important to be consistent with your dog.

“Think about slot machines,” she said. “The reason they are so addictive is that you never know when the jackpot will come.”

What are some of your tips to stop a dog from begging?