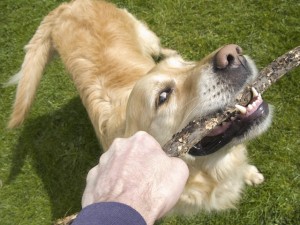 Tug of War is a fun game between dogs or between a person and a dog. I play tug with my Lab mix Ace almost every day. He loves it!

But, my dog also growls and shakes the toy and gets overly excited at times, so I can see why some people might think tug encourages a little too much aggression. You may have even heard some people say you should always make sure to “win.”

I asked a few others for their thoughts on tug, and here’s what they had to say.

Tips for Playing Tug of War

Play tug of war in a controlled manner

The game can be a very bad game or a good game, but it depends on how it’s played, said Jakob Hunt, the vice president of operations for the dog daycare chain, Dogtopia.

If you play tug with your dog, he suggests you create a scenario where the dog at some point releases the toy willingly. Then, have the dog sit or do some other command until you begin to play again.

“If you do this in controlled intervals, tug, sit, wait, then tug again or even have them practice ‘down’ until you restart the game, it can be a really effective way to teach your family member that you are in charge even when they are very excited," he said.

This is what I do with my dog Ace, and it works well to keep him from getting too excited. I also set rules when playing fetch and other games.

Use tug as a reward

Scott Hammond is a dog handler with Rocky Mountain Rescue Dogs, a nonprofit canine search and rescue organization that uses dogs to assist in various situations such as avalanche searches and disaster searches.

He said he will sometimes use tug as a reward for when the dog has a “find.”

Some of you may have watched dogs in sports like flyball or agility where the trainer also uses tug as a reward.

End the game peacefully with ‘trade’

Tug of war is a great way to bond with a dog, increase the dog’s toy drive and even help the dog develop muscle tone, said Nancy Bailey, a dog trainer and author of two dog training books.

However, she recommends ending the game with a “trade” for a treat or another toy.

“This teaches the dog to end the game peacefully,” she said. “Also, it should be restricted to something the dog can pull without destroying it. In other words, don’t play tug with your shirt sleeve!”

I asked her why so many dogs love playing tug, and she said it goes back to tugging at the prey, but it is also a very common game in the wild for dogs.

It’s a great way to interact and have the full attention of the owner or the other dog, she said.

Do any of you play tug of war with your dogs? What rules or limits do you set, if any?

Looking for toys to play tug of war with? Click here.