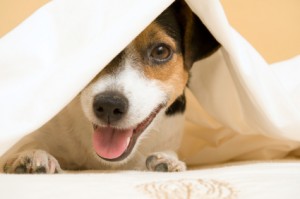 I don't allow my dog to sleep on my bed because he's a little, um ... gross. Ace is one of those big, drooly-types who always has "shoelaces" hanging from his mouth. If I do allow him to sleep in my room on the floor, he's constantly waking me up by flapping his ears, flinging drool or snoring. Needless to say, my dog does not sleep on my bed.

But what if your dog isn't as noisy and slobbery as mine? Is there really anything wrong with allowing your dog on your bed? I talked with a veterinarian and an expert in canine behavior to get some tips on this topic, but I'd also love to hear from you in the comments.

Should Your Dog Sleep on Your Bed?

"Personally, I currently have five dogs that sleep on my bed and have had dogs sleeping on my bed for the last 30 to 50 years," said Dr. Jeff Werber, owner of Century Veterinary Group in Los Angeles. "I would say about 80 percent of my clients generally allow their dogs in the bed as well."

He said allowing the dog to sleep on the bed is typically not an issue as far as training, and that it could even help strengthen the bond between the dog and the "pet parent."

The dog's temperament should be a factor when you determine whether or not to allow the dog on the bed, according to Chris Onthank, an expert in canine behavior who maintains the site CanineMaster.com.

While he said there's nothing better than cuddling with your dog, sometimes elevation determines the status of canines and other species, including humans.

"The higher up you are, the more dominant you may be perceived," he said. "By allowing your dog to sleep in bed with you, you may be saying 'come on up, you are an alpha too.'"

He compared this to dogs that continually bark in the house at people passing by.

"One of the best ways to fix this is to not let your dog be on elevated areas," he said. "When a dog is roosting on an elevated area, they may be acting as a lookout for the rest of the pack."

If there are no behavioral problems, dogs may be allowed on the bed if the owner invites them first, according to Onthank.

"You should still correct them if they jump up on their own."

Werber also said that dog owners should choose for themselves when they want to allow their dogs on the bed. A command such as "off" can be used to teach the dog when to leave.

This approach has worked well for Ace over the years. While I typically do not allow him on the bed, on occasion I will invite him with the command "up." I also use "off" when I want him to return all four paws to the floor. These have been important commands, especially since most people do not appreciate a 70-pound Lab mix jumping onto the couch next to them.

Some dogs might become possessive of the bed or of the owner, especially when a significant other enters the bed, according to Werber. If that is the case, it's best to immediately remove the dog from the bed and to stop allowing the dog to sleep there.

If the dog displays any aggression when it is on the bed or other furniture, the dog "must never be allowed up in these areas again."

He suggested tethering the dog to a specific area of the bedroom next to the dog's own dog bed.

"This way the dog is not going to sneak up into your bed in the middle of the night," he said.

If your dog is showing any amount of aggression, Onthank said you may want to get the assistance of a trainer or behaviorist for safety reasons.

How about you? How do you determine whether or not to allow your dog on the bed?