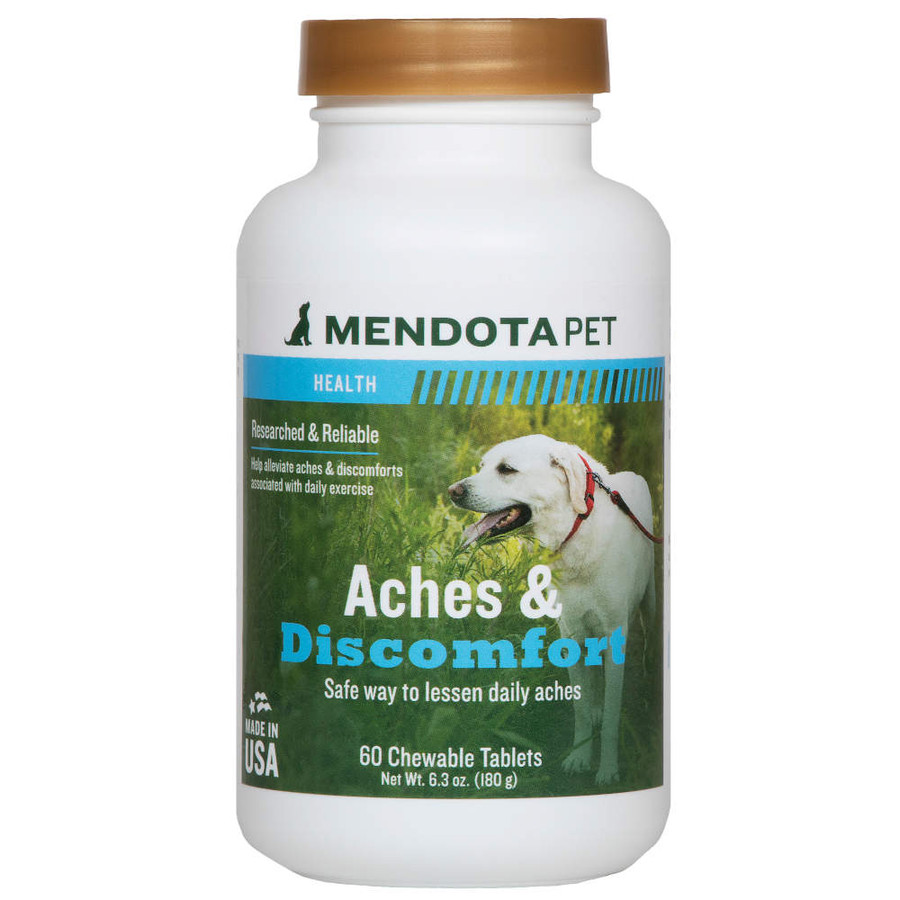 If your dog has been injured, recovering from surgery, or simply has aches and pains due to old age, then Mendota Pet Health's Aches & Discomfort is the perfect choice for restoring your dogs quality of life. This aspirin-free pain reliever for dogs is scientifically formulated to reduce pain and inflammation.

This pain reliever for dogs is as effective as aspirin, however, White Willow does not cause stomach upset or liver damage as aspirin can. White Willow will not thin your dog's blood, unlike aspirin which can cause excessive internal and external bleeding.

This healing relief is made with the all natural herb White Willow. White Willow has been used for centuries for natural pain relief and reduction of fever. White Willow's most important medicinal qualities are its ability to ease pain and reduce inflammation as well as reduce fever, antiseptic, and immune-boosting effects and over time it actually helps heal your dog.

This aspirin-free formulation includes Yucca, which is a natural herb used for inflammation and pain control that actually blocks the release of toxins from the intestines. Finally, pharmaceutical grade MSM is added to improve connective tissues, allow cells to retain their elasticity, reduce swelling and help ensure faster recovery.

White Willow Bark is a natural alternative to Pfizer's Carprofen, marketed as Rimadyl®.

University of Maryland Medical Center: White willow bark is a tree native to Europe and Asia, and the name "White Willow" comes from the color of the leaves, which are covered with fine white hairs. Its use dates back to the time of Hippocrates (400 BC) when patients were advised to chew on the bark to reduce fever and inflammation. Willow bark has been used throughout the centuries in China and Europe, and continues to be used today for the treatment of pain (particularly lower back pain and osteoarthritis), headache, and inflammatory conditions such as bursitis and tendinitis.

The bark of White Willow contains salicin which is a chemical similar to aspirin (acetylsalicylic acid) and is thought to be responsible for the pain-relieving and anti-inflammatory effects of the herb. In the 1800s, salicin was used to develop aspirin.

The German company Bayer eventually created a synthetic, less harsh derivative of salicylic acid, called acetylsalicylic acid (ASA), and mass-produced it under the name aspirin. Despite this, aspirin is still known for stomach irritation and blood thinning.

Researchers have also suggested that willow bark is more effective than aspirin because of other active compounds found in the bark but not the drug. Animal research at Cairo University compared a willow bark extract to acetylsalicylic acid (ASA) and found that a willow bark extract was as effective as aspirin in reducing inflammation, even though the salicin content was lower than an equivalent dose of acetylsalicylic acid (ASA).

Researchers believe that salicin, the chemical found in willow bark, is responsible for the bark's effects and studies have also identified several other components of willow bark which have antioxidant, fever-reducing, antiseptic, and immune-boosting properties. Some studies have shown willow is as effective as aspirin for reducing pain and inflammation (but not fever) at a much lower dose than aspirin. While as effective as aspirin, willow bark's effect has been found to last longer than aspirin even though it may take longer to kick in.

A Potential Alternative to Rimadyl®: Aspirin-Free, Aches & Discomfort for dogs is scientifically formulated with the all-natural White Willow herb to reduce pain and inflammation. This product s is as effective as aspirin, however, White Willow does not cause stomach upset or liver damage, nor will it thin your dog's blood like aspirin (which can lead to excessive internal and external bleeding).

This item can not be shipped outside of the United States.