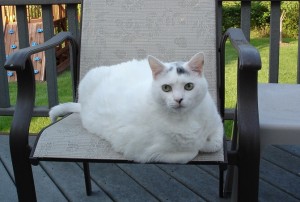 November is Pet Diabetes Awareness Month, so I wanted to learn more about the signs of diabetes in pets, what causes it and if there is anything pet owners can do to prevent their pets from becoming diabetic.

Here’s what I found out:

According to Cornell University, diabetes is a complex and common disease where the body either:

Insulin is a hormone that is needed to convert sugar and other food into energy.

What are some of the signs that a pet could have diabetes?

The first sign that many pet owners notice is the pet’s excessive urination, according to Dr. Michelle Newfield, medical director at St. Tammany Humane Society in Louisiana.

“A house-trained dog who could previously hold its urine all night is now needing to go outside multiple times a night,” she said. “They may even start to have accidents in the house.”

She said cat owners may notice larger clumps in the litter box and more clumps than usual.

This is what Len Saunders noticed around the time his cat Snowball (pictured) was diagnosed with diabetes.

“The signs for me was the excessive drinking and urinating,” he said.

Once his cat became a diabetic, Saunders said it was very time consuming to give his cat daily insulin shots. However, he was happy to do it because he loved his pet.

Another common sign of diabetes in pets is unexplained weight loss. While the pet may have a great appetite, he will still be dropping weight, Newfield said.

Actually, the pet may even have a “ravenous” appetite, according to Dr. Oscar Chavez, chief medical officer with the dog food company Just Food For Dogs

“The body thinks it's starving due to its inability to utilize blood sugar,” Chavez said. “Weight loss, despite a ravenous appetite, is a pretty strong indication that something may be wrong.”

Are there ways to prevent diabetes in pets?

The exact cause of diabetes is unknown, according to the ASPCA. However, some factors that may play a role in developing the disease could include genetics, obesity and chronic pancreatitis.

Chavez believes nutrition may play a large role in preventing diabetes. He said a well-balanced, high-quality, whole-food diet is the best protection against the disease.

Newfield also said nutrition is important in preventing diabetes in pets. She tells pet owners it's important for dogs and cats to maintain a lean body mass.

Of course, along with a healthy diet comes proper exercise.

The key is for pet owners to keep their pets active and to monitor their weight and diet, according to Saunders. “Just as you would for a human.”

Do any of you own a pet with diabetes? What advice would you give to other pet owners?