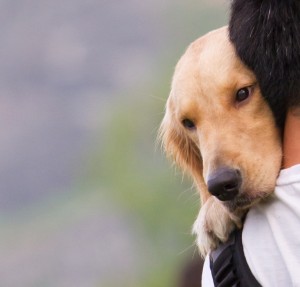 Lisa Napell Dicksteen never thought that her beloved family pet cat Gus would be lost. But one October day, he snuck out the door and didn’t return for months.

It’s most pet lovers’ nightmare. If your pet became lost, how confident are you that he would find his way back home? If Fido is microchipped and/or wears ID tags, his chances are pretty good. But without ID? Chances aren’t so good. Can you even bear to think about losing your furry friend?

National Pet ID Week, the third full week of April, is almost here, and so we here at dogIDs want to remind you the importance of ID tagging your pet. It just may be the one hope you have to getting your friend back home.

It’s a happy ending for Gus and the Dicksteen family of Boulder, Colo., thanks to an ID tag. But those few months when they had no word about their beloved cat was tough. Gus liked to go in and out of the house, but that one day when he hadn’t returned by nightfall, the family knew something was wrong. They searched the neighborhood and called for him, but he never came. “We posted fliers, called the Humane Society and told our new neighbors he was missing, but the snow kept falling, it was bitterly cold, and there was no sign of Gus,” Lisa recalled. “All we could think was that, with his bell around his neck, he was a walking advertisement to the local wildlife that dinner was served,” which was a real concern since they had seen a mountain lion not far from their house earlier!

“Hope was waning in the middle of December when the call came,” Lisa told us. But sure enough, a voice on the other line asked if they owned a cat named Gus. “My husband and son sped down the mountain, along a busy highway, turned onto a small road on the far side of the highway, and covered another 3 miles or so to find themselves at a llama farm. Gus had wandered into the barn looking for shelter and food.” 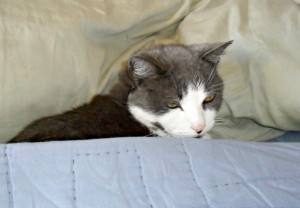 The Dicksteen family’s phone number on that tag is what brought Gus back home. But his new physical appearance showed that he had a rough journey. “He weighed only 6 pounds, had a large puncture wound in his neck, and the elbow joint in his front left leg had clearly been broken – it was fused in the bent position, indicating that it had broken and healed while he was out there all alone,” Lisa recounted. “But he was alive and he was coming home!”

Since then, Gus has made a full recovery, though his elbow will always show that bend, and he is back to enjoying his time at home sleeping, eating, or perhaps dreaming of his adventures on the open road.

Gus’ story, while heartwarming, is a common one, and not all pets are as lucky as Gus. According to an ASPCA survey, 80% of pet owners said that a pet ID tag was "extremely important" or "very important." Yet only 33% reported that their pet wears an ID tag all the time.

Kathryn Primm, DVM and owner of Applebrook Animal Hospital in Tennessee, attested that she has several examples every week where pet ID tags and microchips reunite people with their lost pets.

“One day, we got a visit from a police officer complete with squad car and she had one of our patients in the back seat,” she remembered. “She saw him running along the road with his collar and tags and knew that he was lost, so she actually took the time to stop and get him. He had a Rabies tag on with our clinic name so she just brought him to us and we called his family.”

Another time, there was a tornado in the area, which led to many pets escaping and getting lost. Primm had one client whose strictly indoor cat was lost when the tornado ripped away the sun room where she liked to stay. Three dogs also came to her house in the days that followed the tornado, and none had ID.

As Primm said, one of the biggest reasons to ID your pet is because animals can't tell you their names!

Microchipping is important because it will never fall off like a collar or tag can. But few families own a microchip scanner, so if someone finds your pet, they may not know to take the animal in to a vet or shelter to scan the chip’s info. That’s why we recommend both methods. Instant, visible, identification, will make it that much easier to get your best friend safely back home.

The good news is that the price of peace of mind is very reasonable. We have hundreds of dog ID tags available right here for as low as $10.