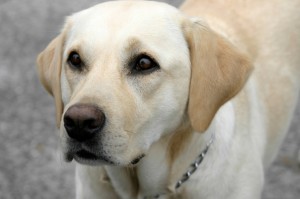 I write about dog training fairly often on this blog, including all the things you should teach your dog such as to heel or to interact appropriately with other dogs, etc.

But what are some things a dog owner shouldn’t do while training a dog?

The following are some of the top dog training mistakes people make, according to the dog trainers I interviewed. I don't know about you, but I'm a little guilty of most of these ...

One of the top mistakes dog owners make is to repeat commands, according to Samantha DeDivitis, founder of Paws with Manners Dog Training.

Commands should never be said more than once, she said. But instead you hear dog owners saying things like, “‘Buffy, sit. Sit? Sit? Come on, sit? Buffy, sit! Sit! Sit!’ and all the while the dog is paying no attention to them.”

According to DeDivitis, if you repeat a command, you're teaching your dog there's no need to respond the first time because you’ll just say it again.

“The dog needs to understand that there won't be a second command. He needs to do it the first time he's asked,” she said.

“Inconsistency is the leading contributor to frustrations on both ends of the leash,” according to Karen Scoggins, a dog trainer and founder of the pet food company My Perfect Pet.

Using a variety of terms to convey the same message leaves the dog confused about what command was really given, she said.

For example, does “down” mean “lie down?” Or does it mean “stop jumping?”

According to her, dog owners also allow their dogs to ignore commands, which teaches them that obedience is optional in some situations (such as when the doorbell rings), not mandatory.

Calling the dog before doing something negative

Dog owners also have a bad habit of calling their dogs before doing something the dogs perceive as negative, DeDivitis said.

“Dogs should only be called to you for positive things,” she said. “In their mind, ‘Come’ should always mean good things await when he gets there.”

For “negative” things, just go and get your dog, she said.

Encouraging behaviors that are not desired long term

A good example of this is jumping.

While a puppy may be encouraged to jump as a way of showing affection, that same behavior is “bad” when the dog becomes 40 pounds, Scoggins said.

“Obedience does not come with age,” she said. “It comes with consistency and discipline. Do not wait until the dog has developed bad habits that need to be corrected. Rather, start day one with consistent setting of expectations and obedience.”

“People tend to go heavy on the verbal corrections but don't praise enough,” DeDivitis said. “You have to communicate with your dog and let him know the things he's doing right and well, not just the stuff you don't like.”

How about you? Are there any mistakes you have made with your dog?