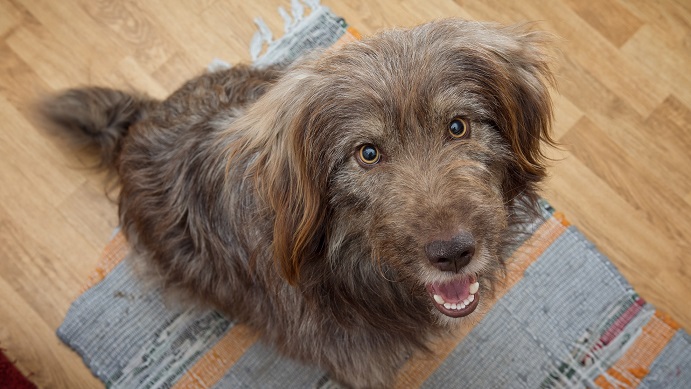 You set a bag of rolls on the counter and then head out to your car to carry in another grocery bag. You’re gone a whole 30 seconds and … the rolls are gone!

Raise your hand if your dog is guilty of this!

Do any of you have dogs that like to steal food off the counters? Not only is this frustrating, but it can even be dangerous if the dog takes something that could be harmful, like chocolate.

The following are a couple tips you can try to stop your dog from “counter surfing.” Unfortunately, it’s a fairly common problem.

How to stop a dog from counter surfing

If you have a dog (or cat) who counter surfs, it’s obviously best not to leave food out unattended.

David Wright is the founder of the dog-training company iWorkDogs, and he said most people do not have the patience or time to train their dogs to stop counter surfing.

The next best thing is to manage the behavior by keeping counters clean and confining the dog using a crate, a dog gate or closed doors when they can’t supervise, he said.

2. Don’t give your dog food from the table.

If dog owners choose to share “table scraps” with their dogs, Wright encourages them not to give their dogs the food directly from the counter or table. Instead, place the food in the dog’s bowl, ideally while the dog is in a crate or on a dog bed.

Also see our post on how to stop a dog from begging.

This is a helpful exercise because you’re teaching the dog to ignore food.

Wright suggested teaching “leave it” to any dog who counter surfs.

“Present your dog with food, and ask him to leave it,” Wright said. “When the dog ignores the food, even if it’s only for a moment, you mark it with a ‘good’ and reward the dog with a different piece of food.”

He recommends you start out by holding your hand out flat with a treat in your palm. Tell your dog to leave it, and if he reaches for the treat, close your hand. When the dog stops trying to get the treat, tell him “good” and reward him with food in your other hand.

Eventually, you can increase the amount of time you make the dog leave it and the distance between you and the food, Wright said.

4. Set up scenarios where your dog is tempted to counter surf

At least if you set up scenarios where your dog is likely to counter surf, you can correct unwanted behavior and reward good behavior.

He said to tie a string to one end of the bagel and the other to a plastic bowl. Then, fill the bowl with empty soda cans.

“Allow your dog to see you place the bagel on the counter and walk out of sight,” he said.

While you are out of sight, Wright said your dog will have the choice to take the bagel. If he pulls the bagel off the counter, all of the cans will come crashing down, startling the dog. That’s when you would walk in and express your disappointment, without showing anger.

Wright said to try again with different food the next time. If the dog starts to jump up for the food, you should rush in and say “no!” to startle him.

“As soon as all four of the dog’s paws are back on the ground, say ‘good,’” Wright said.

Do any of you have dogs who try to steal food? What has worked for stopping this behavior?

What To Do If Your Dog Won't Listen