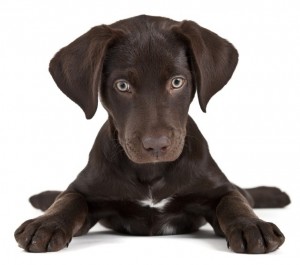 Have you ever heard a puppy owner say something like, "She just doesn't get it! I take her outside and she still pees in the house"?

Some puppies are harder to potty train than others, but a big factor is actually how consistent the owner is with the training. It's about rewarding the good behavior, but it's also about preventing the unwanted behavior.

1. Giving the dog too much freedom.

The three words to live by when you are raising a puppy are "too much freedom," said Brad Jaffe, owner of Dogological.com.

"You wouldn't leave a crawling baby alone to roam the house without supervision," he said. "They don't know the rules. They don't know what's dangerous or poisonous."

It's the same with puppies, he said. They don't know what's OK until we teach them, and one way to be proactive is to set up gates or to use a kennel when you can't supervise.

This brings us to another common problem:

2. Feeling guilty about using a kennel or crate.

Some dog owners don't like to confine their dogs or they think crates are mean, said dog trainer Colleen Demling of Pawtopia.com. These owners then end up letting the pup run all over the kitchen or house.

"Puppies, being puppies, will have accidents and the more accidents they have, the more they will think it is OK to pee in the house," she said.

Dog trainer Jill Morstad of PrairieK9.com also recommends puppy owners use kennels to limit a puppy's freedom. Even when the puppy is not in a kennel, she said it helps to keep the puppy on a leash "tethered" to a responsible adult. That way the puppy can't sneak off and have accidents.

Demling said another helpful tool is to put a cat collar with a bell on the puppy. That way you'll have an easier time hearing her if she tries to wander off in the house.

As a pet sitter, I can't stand any type of indoor bathroom for dogs. I have seen way too many small dogs think it's totally fine to pee next to the potty pads or to pee on small rugs that resemble the pads. Gross.

Morstad said she does not recommend puppy potty pads for the same reason.

"A dog learns by association, and if you allow him to do his duties in the house on paper you are in effect, teaching the dog to potty in the house," she said.

Even if it's very cold, a healthy puppy can still be taken outside to go to the bathroom, she said. "You take him out just long enough to do his duties and then you can both come right back in!"

Jaffe said potty pads are appropriate if dog owners work long hours and are unable to get home to let the dogs out or unable to hire someone else to do it.

4. Taking the puppy out through all the different doors.

Puppy owners make the mistake of teaching the puppy that all doors lead outside, Demling said. The problem with this is that with so many exists, the puppy does not learn where he should go to signal he has to go potty.

While the puppy is learning, stick to one exit every time, she said.

Simply letting the puppy outside does not mean he knows what to do out there, Morstad said.

"The biggest problem between the dog and the owner is that the dog would love to get it right, but he doesn't know how to communicate with you," she said.

Likewise, people make the assumption that the puppy knows it's not OK to go potty in the house, said Jaffe.

"They don't know what we want from them until we teach them," he said.

Have you raised a puppy recently? What are your potty training tips?