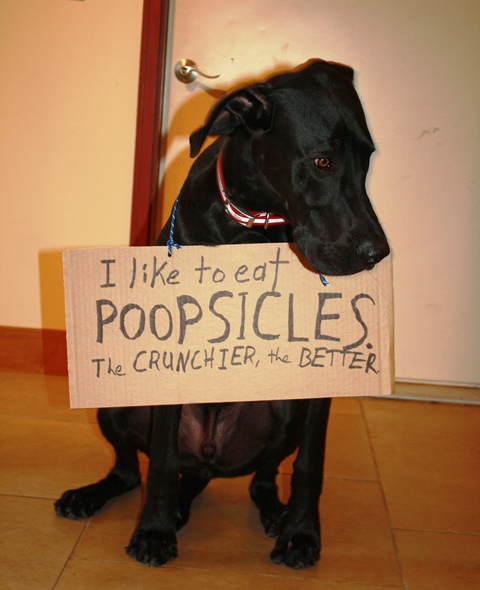 Does your dog have the gross habit of eating his own poop? Or maybe snacking on your other dog's poop? No one wants to receive doggy kisses after that! And how about when you're at the dog park and sure enough there's your dog munching on turds! Embarrassing!

Syrus is one of the dogIDs dogs, and he has a tendency to snack on "poopsicles." So, don't worry if your dog is doing this. He's not alone! Sometimes they grow out of the habit, and sometimes they need some help. I contacted a couple of dog trainers to get their ideas on how to stop this behavior.

It's just what dogs do

If your dogs enjoy "dining on their own or others' waste" you don't have to worry too much, according to dog trainer Anthony Newman of Calm Energy Dog Training. "Although a very bizarre behavior from a human perspective, it is actually quite normal for dogs."

Dr. Jennifer Cattet is the owner and operator of Medical Mutts, a company that trains diabetes alert dogs and seizure dogs. She also said the behavior is not abnormal for dogs. It's just undesirable since humans are "rather disgusted by it."

The behavior is conditioned

"Anytime the dog can eat feces, the behavior will be reinforced," said Cattet. To get rid of the problem, she said the owner should make sure the dog doesn't have the option of eating poop. This may mean keeping the dog on a leash while outside for the time being.

According to Cattet, the problem could've initially been triggered by hunger or insufficient food at some point in the dog's life. If your dog is eating his own waste, she said the first thing you should do is get him checked by a vet and make sure he's eating a high-quality diet.

Another factor that could condition a dog to eat poop is if she spends too much time in a crate, according to Newman.

A good example of this could be a puppy mill setting.

"They're forced to pee and poo right where they eat, sleep and live, so eating their mess is the only way of cleaning up," he said.

Make sure your dog gets enough exercise

Cattet and Newman both listed boredom, a lack of stimulation and a lack of obedience as additional reasons why a dog might eat her own waste. They suggested increasing the dog's exercise and obedience training.

"When dogs aren't getting enough physical, mental and social exercise and stimulation, eating poop is the most interesting option available to them," Newman said.

He recommends three 30-minute walks per day, plus 30 minutes of off-leash time for the dog to run and play in a dog park with friends.

"Walks are really about mental stimulation," he said. "For physical exercise and social engagement, dogs need to run off leash with other dogs."

Dog owners should start with simple things like teaching the dog to lie down and wait until you verbally release him to eat his food, Newman said. Dog owners can use a "sharp noise" such as a clap or a tug on the leash to correct the dog from doing something obsessive of disobedient without causing pain or fear.

Even if your dog has a tendency to eat his own waste, you can "normally teach him what's on and off limits," he said.

He recommends combining obedience with corrections to teach the dog "leave it." You would correct the dog until he steers clear of whatever you'd told him to leave. Then reward him with treats and play.

"Put these elements into use around poop by allowing your dog 'controlled access' to the poop," Newman said. "He can try to get it, but you're able to 'correct' him with a 'leave it.'" 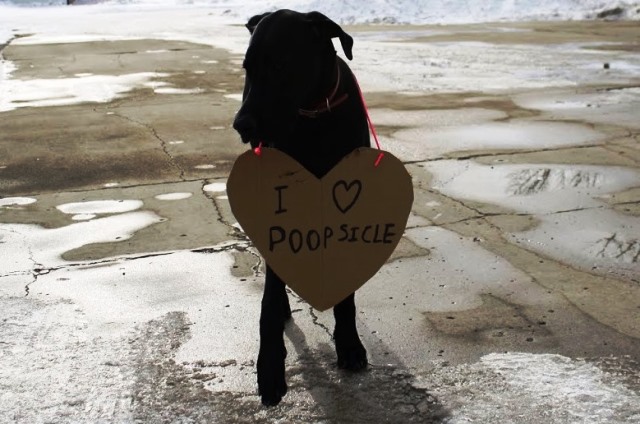 What else can dog owners do to stop this behavior?

Cattet recommends keeping the yard clean and picked up at all times. She also said dog owners can add deterrents to the dog's food. These products are designed to "alter the taste of the feces, making them less appealing."


Will some dogs grow out of this behavior?

Newman said many dogs will grow out of it. (That's good news for you, Syrus.)

"If you're witnessing the behavior in a puppy, then you have less to worry about," he said. "However, you can and should still practice the same exercise, socialization and obedience routines with your puppy. Don't just wait to see if the behavior will disappear on its own."

Do any of your dogs like to eat "poopsicles?"