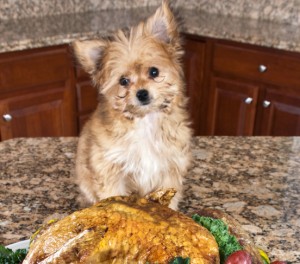 Do you plan to share some of your turkey with your dog this Thanksgiving? Turkey can be a safe treat for dogs in moderation, but feeding table scraps can also lead to unwanted behavior such as begging. The following are some tips from veterinarians on how to help dog owners decide what's best for their own unique dogs.

Dr. John Faught is the medical director of Firehouse Animal Health Center in Austin, Texas. He generally does not encourage his clients to feed their dogs table scraps for two reasons.

"We don't want to encourage begging at the table every time we have a meal," he said. "Second, we prepare food for human taste by adding fat, salt and spices. Our pets are typically not acclimated to eating such things."

He said dogs that are not used to eating these ingredients can end up with upset stomachs.

If you do decide to share with your dog

Faught suggested if dog owners really want to share a Thanksgiving treat, they should stick to something bland and in small amounts. A small piece of turkey or a green bean or two would be good options.

"Stay away from carbohydrates, fatty foods or spicy foods," he said.

Which foods are dangerous to dogs?

None of the traditional Thanksgiving foods - pumpkin pie, cranberries, turkey, mashed potatoes, sweet potatoes or stuffing - are generally dangerous to dogs on their own, but there are certain foods that dogs should not have.

The reason chocolate is dangerous to dogs is because it contains theobromine and caffeine, according to Dr. Karen Becker in an article she wrote called "Top 20 Pet Poisonings in 2011" for the website healthypets.mercola.com. These can cause hyperactivity, tremors, an increased heart rate and potentially death.

For that reason, you'd obviously want to keep that Thanksgiving chocolate pie out of reach or any other desserts that contain chocolate.

As for raisins and grapes, these can cause kidney failure even in small amounts, Becker wrote.

This is important to keep in mind if you include raisins in your stuffing, for example.

A small treat here and there is one thing, but another reason to avoid sharing excess amounts of table scraps with your dog is because the calories really add up. So many dogs are already dealing with weight issues.

"A small bite goes a long way," Faught said. "I always use the example that 1 ounce of cheese to a 40-pound dog is the equivalent of an average-sized human having three extra hamburgers!"

If you do share with your dog, he said to keep the portions small.

Dog owners could also think about cutting back a bit on their dog's regular food that day, and to make sure to get the dog out for some extra exercise on Thanksgiving. After stuffing ourselves with Thanksgiving goodies, most of us could use the exercise as well - not just the pets.

So how about you? Do you typically share a Thanksgiving treat with your dog?